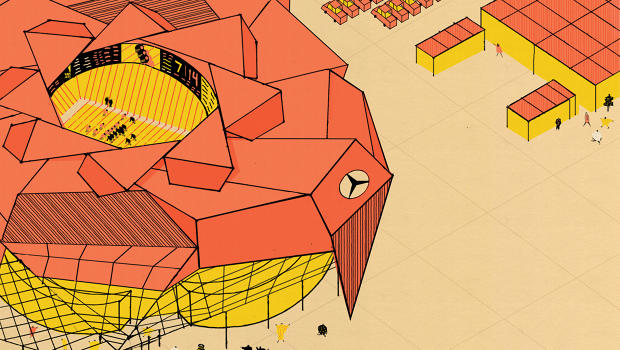 Stadiums with retractable roofs are commonplace, but there’s never been anything like the new home of the Atlanta Falcons, which is set to open for the 2017 season. Instead of a flat panel that slides back, Mercedes-Benz Stadium has an innovative oculus design that recalls a camera lens. It’s one of many forward-looking elements of the $1.5 billion, 71,000-seat stadium. The project’s lead architect, Bill Johnson, explains.

The oculus’s eight segments each retract in a straight line, but an optical illusion makes it look like everything is rotating—a spectacular effect on such a large scale. “One goal was for people to come from all over the world not just for a football game, but to see the structure,” Johnson says. And while most retractable roofs take more than 15 minutes to open, the oculus’s clever mechanism and light materials let it accomplish that task in as little as six.

Just under the oculus will sit a unique, 360-degree “halo” HD screen that, at five stories tall and 1,100 feet long, will be more than triple the size of any other NFL video setup. IBM, the project’s technology partner, will wire the facility with 4,000 miles of fiber-optic cable, build advanced security systems, and help create future interactive experiences. “The idea,” says Johnson, “is to provide a game-day spectacle that can’t be experienced at home or in a bar.”

One of the most striking features is the 163- foot-high entrance, which is far more inviting and dramatic than a typical stadium design. Massive glass triangles let in natural light and connect the stadium to Atlanta’s skyline.

To increase home-field advantage, end-zone seating is steeper than usual, creating “a wall of fans that forces the opposing team to play into an intimidating environment,” Johnson says.

The Falcons’ new home will likely be the first-ever LEED Platinum–certified stadium. Solar PV panels in the parking area will power electric vehicle charging stations, and the property is connected to the Atlanta Bike Trail Network. On-site vendors will prepare some dishes with vegetables grown in the stadium’s urban garden, which will exclusively use rainwater harvested on-site.

Click here for the 2016 Innovation by Design Awards finalists and winners.