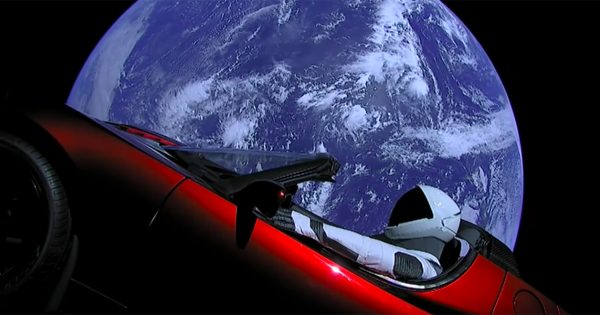 There’s a Starman waiting in the sky. He’d like to come and meet us, and make Tesla our new ride.

Elon Musk pulled off a double marketing coup on Tuesday with the first successful test launch of his Falcon Heavy rocket, the flagship of his private space-flight company SpaceX, and the subsequent debut of its payload—a Tesla Roadster driven by a dummy nicknamed Starman—as the first car in space.

While the launch was clearly one of the most dramatic moments of livestreaming in recent memory, it’s the live YouTube feed of Musk’s own cherry-red Roadster circling the Earth that will perhaps generate the biggest publicity boost for Musk’s emerging electric-car company. With a famously nonexistent ad budget, Tesla just secured a place in auto marketing history.

The stunt is reminiscent of Red Bull’s Stratos mission, in which skydiver Felix Baumgartner jumped from a balloon capsule  24 miles and landed safely, all while being shown live around the world and surrounded by Red Bull branding.

By comparison, Tesla’s play isn’t quite as overtly branded, but it’s certainly more ambitious—requiring, of course, about $500 million in investment by SpaceX to ensure the successful development and launch of Falcon Heavy.

Musk has been relatively coy about the Roadster’s role in the test flight, tweeting a livestream link with the comment, “Apparently, there is a car in orbit around Earth.”

The car has a long trip ahead of it, moving into orbit around the sun and then heading far from Earth. The original plan was to go nearly 250 million miles from Earth and approach Mars, according to Space.com. However, a rocket carrying the car overshot, meaning it’ll pass Mars’ orbit and enter the asteroid belt.

While Tesla is one of the most notoriously un-advertised brands, Musk has often shown an interest in finding innovative ways to promote his plug-in project. A fan-made ad contest in 2017, for example, sparked some pretty impressive amateur projects, including one starring a grounded spaceman waiting for his chance to fly.

Most of the social chatter around SpaceX’s successful launch and the Tesla Roadster’s epic journey has been positive, with many observers simply excited to see America returning to space in an ambitious way. They also didn’t miss the Tesla connection:

But some felt the cheerleading was a bit overboard for a company looking to privatize space flight with a related auto brand piggybacking on board as a marketing stunt:

About Elon’s big day… this is a car commercial in space. Everyone: pls stop participating.

Everyone hates my tweet it seems. I get it, we need moments of awe. But between his union busting at the Tesla factory and the incredibly dangerous flamethrowers, I think this guy is out of control. He’s a savvier Branson and that ended badly.

In the end, even those well aware of the marketing machine behind Tesla’s space voyage generally have to admit it’s one that deserves a nod of respect:

I get this is also a Tesla advertisement and whatever but just look at it. Ad’s can be art. THIS IS ART.